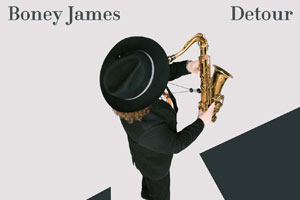 Since making his leader debut with 1992's Trust, saxophonist and composer Boney James has consistently placed in the Top Three spots on the contemporary jazz charts. After multiple Grammy nominations and gold-certified albums, James' meld of soul-jazz, R&B, funk, and pop, and a high-energy live show have come to define the sound of 21st century contemporary jazz. Albums such as 1999's Body Language, 2004's Pure, and 2015's Futuresoul have influenced an entire generation of artists. His success continued with 2017's chart-topping Honestly and 2020's Solid, which hit number ten on the pop charts. James delivered his 18th album, Detour, in 2022.