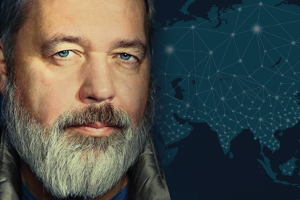 Dmitry Muratov, an independent Russian journalist who covers Russian politics and policy and an open dissenter of the war in Ukraine, will be speaking at Southern Connecticut State University on Friday, September 9, 2022 at 7 p.m. in the John Lyman Center for the Performing Arts.

With U.S./Russian relations at their most contentious since the Cold War, Muratov’s visit is well-timed to deliver a unique insider perspective on the hostage situation involving WNBA star Brittney Griner and the escalating civil unrest in Russia, which most recently includes the raiding of anti-war protest journalist Marina Ovsyannikova’s home.

Upon the Russian invasion of Ukraine in February 2022, Muratov released editions of his newspaper, Novaya Gazeta, in both Russia and Ukraine in defiance of the Russian media watchdog’s rules. The paper was forced to suspend publication in March amid repression of critics of the offensive in Ukraine, and in July was set to be stripped of its license under court order.

Seven Novaya Gazeta journalists have been murdered since 2000, in connection with their investigations.

Muratov has established himself as a highly regarded advocate for an independent press and is well-known for investigating abuses of power. He was awarded the 2021 Nobel Peace Prize for his “efforts to safeguard freedom of expression.” In June 2022, Muratov auctioned off his Nobel Peace Prize for $103.5 million, with all money going to benefit Ukrainian refugees.

Muratov is the co-founder of Novaya Gazeta, established in 1993, and served as its editor-in-chief from 1995 to 2017, and once again in 2019. Muratov was the recipient of various honors, including the International Press Freedom Award in 2007 from the Committee to Protect Journalists.

Sponsored by SCSU Integrated Communications & Marketing, the Judaic Studies Program, and the departments of Political Science, History, Journalism, and English.