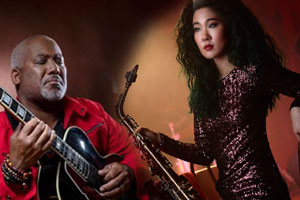 Jonathan Butler is a singer-songwriter and guitarist who leads a life few can imagine. Born in South Africa under the shadow of apartheid and raised in poverty, Butler was the first non-white artist to be played on South African radio and appear on national television. Though his musical abilities would take him away from the world he grew up in, Jonathan would neither forget the plight of his fellow South Africans, nor the man that led them to freedom. It is for this reason Nelson Mandela credits Butler’s music as having inspired him during his imprisonment. In more ways than one, Jonathan Butler is representative of South Africa.

Jonathan’s story begins at a very young age when his father presented him with a homemade one-string guitar. Little did his father realize that he was giving way to a musical phenomenon. From then on, Jonathan’s musical gifts grew by leaps and bounds. In his early teens Butler won a local talent contest, affording him the opportunity to perform with a touring musical company throughout South Africa. On occasion he would perform at lavish concert halls for whites only, where he would not be allowed to use the bathroom, and the very next night he would perform in a dilapidated local township. Ultimately, his ticket to a new life was music.

At thirteen, Jonathan’s talents caught the eyes and ears of the British record producer Clive Caulder. He was signed to Caulder’s Jive Records and the rest is history. Jonathan’s first single broke down racial barriers becoming the first song by a black artist played by white radio stations in South Africa and won the South African equivalent to a Grammy®.

His commitment to his craft came to fruition with his self-titled debut album, which received a Grammy® nomination for the pop hit “Lies.” An instrumental “Going Home” earned him another Grammy® nomination and the mid-tempo ballad “Sarah, Sarah” confirmed Butler’s place in popular music.

East Coast born and bred saxophonist, singer, and songwriter Grace Kelly recorded her first album at 12 years old. Grace, now 30, is a seven- time winner of the Downbeat Critics Poll, five-time winner of ASCAP Composers Award and headlined more than 700 shows in over 30 countries including all major festivals from Montreux to Newport to Montreal. She has been featured in Vanity Fair, Glamour Magazine, NPR and CNN among others. Jon Batiste snagged Grace as a regular on CBS-TV’s The Late Show with Stephen Colbert with Jon Batiste’s Stay Human.

In 2009, Kelly guested with the Jazz at Lincoln Centre Orchestra as part of Barack Obama’s inauguration celebration at the request of the ensemble’s director, Wynton Marsalis.range of idioms, including live and in the studio appearing on hundreds of recordings. Now with the release of his sophomore CD, Waiting For You, from Innervision Records, JJ puts forward a stunning selection of original compositions. With the help of a stellar array of musicians, producers, and special guests, his singles “Back Talk” and “Gravy Train” have climbed many of the top radio charts, including Billboard.